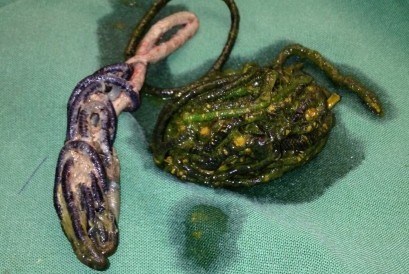 “Frankenstein” is an 8 year old male kitty who has always liked playing with K’s hair elastics. Who wouldn’t? They’re mutli-colored, sproingy and fun!

When K brought him to Dr. Ray, she was worried that he had finally eaten one and was now in trouble. Frank had vomited for several days and was losing energy. He usually throws up every week but then returns to normal, unlike this week. Examination revealed Frankie to be 10% dehydrated, lethargic, and weak. He had a thickened area of his small intestines that was painful to palpate. We admitted him to the hospital for life-saving fluid therapy and proceeded to diagnose his problem with bloodwork and radiographs.

One or two elastics were not his problem. He had several elastics clogging his small intestine and an additional clump of them in his stomach. We took him to surgery and removed all of his elastics….20 in all! K said that she hasn’t used some of those elastics in months, which means his stomach has been carrying around elastics for some time. Frankenstein went home 2 days after surgery and is back to himself, sans the elastics.

Foreign objects in the stomach can stay there for years in dogs and cats, without causing life-threatening illness. It was the movement of a few elastics into the small intestine that resulted in a complete obstruction and the beginning of severe illness for Frank. Remember this:
if a household object is ever in your pets’ mouth, and is smaller than a breadbox, he can swallow it! 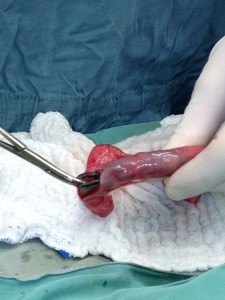 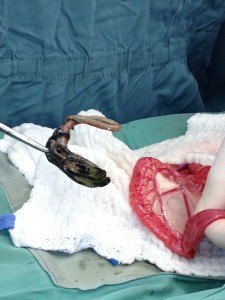 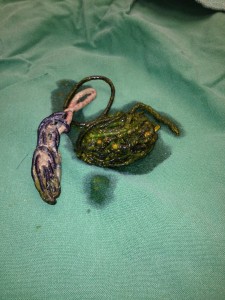