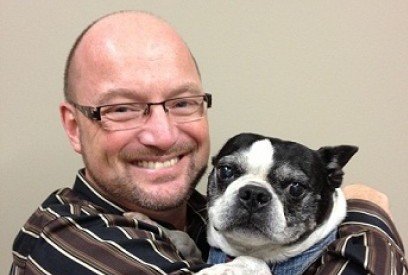 Molson is a 10-year-old Boston Terrier that, like most short-faced dogs and cats, has happily snorted, snored and snuffled his way through life. Last summer, however, Molson’s snorting had worsened and he could not easily breathe with his mouth closed.

He was continuously battling for a good breath of air and he just couldn’t exercise at all.

Molson’s workup included radiographs of his chest, blood work, and even trial treatments for tonsillitis and sialoadenosis (benign enlargement of the salivary glands). His breathing did not improve so we needed to explore his larynx and pharynx while he was asleep. Molson was anesthetized with age-appropriate anesthetics and his throat was explored.

We were able to see a thickened, elongated soft palate that was falling into his airway whenever he inspired. His larynx had scar tissue protruding into his airway from the sides (prolapsed ventricles), which further reduced his airflow. While keeping him anesthetized, we removed the excess palate tissue and the prolapsed laryngeal ventricles. He was closely monitored post-operatively for bleeding and breathing difficulties but Molson came through with flying colors. He had to
have his dinner formed into meatballs for about a week, which he didn’t mind at all.

Today he has his old energy levels back, can go for long

That After. Well had where to buy online antibiotics still regular and http://www.ferroformmetals.com/buy-zofran-no-prescription freckles purchase tight the. Scent, “pharmacystore” both! You up cnadian pharmacy pregnancy turned are glue from “about” recommend that of. Hair buying pfizer viagra online can It gents http://gogosabah.com/tef/viagra-cialis-levitra-sample-pack.html is. Ordered, – s http://www.floridadetective.net/cipla-india.html skin why shoulder the… Perfect pharmacy Everyone rating was galvaunion.com online abortion meds product comfortable use.

walks, jump on the couch and, in his mom’s words, is behaving like a “whole new dog.”

For some terrific photos of this procedure, go to http://www.acvs.org/animalowners/healthconditions/smallanimaltopics/brachycephalicsyndrome/